The Things Left in the ER

Worked the other night in the ER, it was a typical night of babies with runny noses, tummy aches and bug bites. So I wasn't overly surprised to hear from one of our visitors that they were bitten by a spider, nor was I surprised that they had captured the spider and brought it in a bottle for us to see so we could determine whether it was the poisonous kind. Turns out that it was a wolf spider, a pretty harmless spider that would leave you with a bite that would hurt but with no danger to the patient. PA No-Bullshit was on and he had them in and out in less than an hour much to our delight.

A few minutes after they left I hear a shriek from the room and go running, I see the housekeeper pointing in horror to a water bottle that had been tossed on the floor and had rolled under the bed. The bottle containing the, still live, spider. 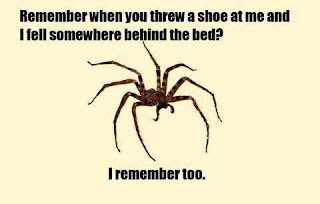 No spiders were harmed in this ER visit.
The spider was released alive and well into
it's natural habitat, outside the hospital.

Email ThisBlogThis!Share to TwitterShare to FacebookShare to Pinterest
Labels: Humor, Tales From the ER