I feel kind of guilty admitting this but I REALLY enjoyed being called off on Thursday. Even though I slept all day it meant that I could actually enjoy my Friday off like a normal, awake-during-the-day kind of person instead of sleeping till noon and then stumbling around until 10pm like a zombie for my first day off.


It was the Mr.'s birthday weekend so we had dinner with the family on Friday night. Saturday his request was "to do something fun", so I decided that we would drive an hour out of town and see the Renaissance Festival as it was in it's last weekend and Mr had never been.  Of course I happened to pick what has been the hottest day of the year so far, it reached 92 degrees!


A great time was had by both, we watched the shows, ate giant turkey drumsticks and drank mead. The shopping was way too much fun and I some how ended up with a pair of earrings. Funny how that happens, but when with the Mr at a festival jewelry tends to end up in my purse.

We even tried our hand at old fashioned games,
I guess back then they didn't have water guns so a bow and arrow it is! 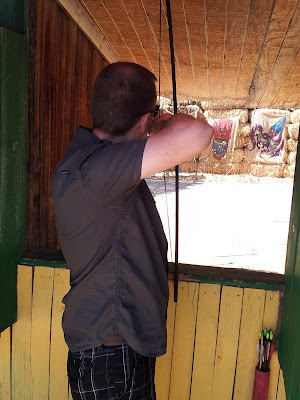 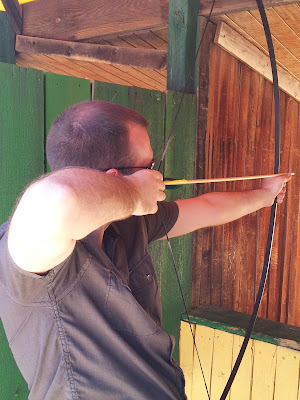 Mr. has apparently done this before.
I however had not,
but was game to try with a good deal of coaching
from my part time Robin Hood.
While I have no pictures to prove it, I did manage to stick a couple of the targets very nicely.

After that it was on to another harmless game, 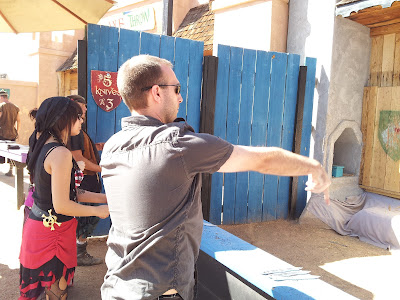 Knife throwing!
Yes this is a very family friendly fair!
I just joked that it keeps me employed to have games like this. 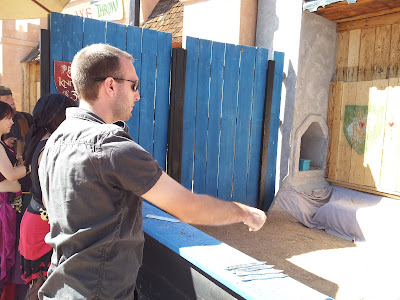 While I'm sure these were dulled versions of the real thing they were heavy enough
to actually stick in the wood boards when thrown correctly.
I decided to join in the fun and took a stab at it.
(pun intended)

Once again I have no photo's to prove it, so you will have to take my word for it, I managed to throw four out of the five knives into the wall grouped about 4 inches from the center of the target (I really wanted the prize). This apparently scared a couple of the on lookers enough that one fellow told the Mr to watch himself if his wife could throw a knife that well who knew what else I could do!  I like to keep people a little off balance, and now that I think of it I have no idea what the prize was for a bulls-eye, I just wanted it.

Email ThisBlogThis!Share to TwitterShare to FacebookShare to Pinterest
Labels: Reality