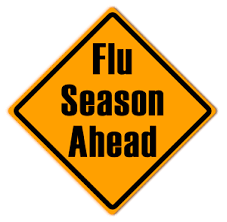 It's the time of the year again where, even in the middle of the desert, the air is getting cooler. If you live in more hospitable parts of the country you are seeing leaves change and sweaters are being broken out. Here it seems we have just finally shaken off the summer's death grip on the city and are looking forward to temperature's that fall below 100 degrees. The weather is finally nice enough that one can go outside without suffering from immediate heat stroke so it was hard for me to accept that it is that time of year again, flu season.

My wake up call came in the bathroom the other night, pinned up on the wall with the other "must read" stuff was the schedule of Employee Health's distribution of flu shots. I sat there staring at the sheet thinking to myself that we just got over summer, how could it be that time again?  Now every patient coming into our unit must be screened for vaccination and offered a flu shot upon admission, gone are the months where that part of the charting was gleefully finished by checking the "not flu season" box and that was that.

Later that evening one of our two new Hosptialist's came down into the unit to look over some patients and write some orders. New Hospitalist #1 suddenly looks up and scans the nurses in the unit and sidles up to an RT and asks which nurse in the unit gives the best shot. Turns out that New Hospitalist #1 needs his flu shot and is a total wuss about taking them. Big mistake, never show weakness in front of a bunch of nurses they will have WAY too much fun with that. So we spent the next 20 minutes suggesting nurses:

"Oh hey how about the Charge Nurse, she's been doing this for 30 years. I'm sure she gives a good shot, she's blind as a bat, but hey you only need to feel the muscle right?"

"How about the House Supervisor? He can do it, he hasn't given a shot in years but I bet it's like riding a bike, you never really forget."

"How about IV Nurse, he drops an IV really well so I bet he gives a great shot. Just don't make him nervous or else his hands will start shaking worse than an alcoholic in DT's."

At this point New Hospitalist #1 hands the syringe and needle to me and tell's me to give him the injection with a hopeful expression on his face that plainly says "the cute quiet one looks like a safe choice". More hysterical laughter ensues at this point, New Hospitalist #1 looks confused as to why his choice would elicit such a reaction, so I figured I'd clue him in.

"They think it's hysterical that you asked the nurse with the least amount of experience to give you the shot."

"How many years of experience do you have?"

"None at this point, I'll be done a year in December. You got a totally newbie"

Quick poke, the guy must work out, he has great deltoids.

"Ok, so are you going to give me the shot or what?"

I show New Hospitalist #1 the empty syringe and the engaged safety on the needle, then toss it into the sharps bin, while he tries to figure out how and when I stuck him since he obviously didn't feel it.

The rest of the night I walked with a little bit of swagger in my step, just a little.