Things have been horribly busy in our unit. Normally around this time of year we see a drop off in census as everyone anticipates the holiday, but this year we have been running nearly full with a really high acuity. We have some seriously sick people.  This combined with the holidays being around the corner has made all the nurses a little high strung and grumpy lately, myself included.

Thus, I was not overly happy when I was assigned a patient who was a total care and she was huge. She took up nearly the entire hospital bed and was in such a bad way that she couldn't even move herself, it took 3 nurses to turn her and change her sheets.

After another nurse and I settled her in at the beginning of my shift, my back was already starting to ache and I could feel a foul mood set in. I looked up and I saw I gentleman quietly slip into my room. As per protocol I got out of my seat and introduced myself as the the night nurse.

The gentleman smiled at me and shook my hand with a warmth that I am totally unused to seeing on a family members face under such circumstances. He asked me if I was the one who has made his wife look so pretty in bed, and then thanked me for doing such a wonderful job. I was stunned and my heart melted a little that night, I offered him a cup of coffee and stayed to chat with him.

I found out that night that they had been married for nearly half a century, that they had one child, a son. He came by later and was just as sweet of a soul as his father. I also learned that they were preparing to withdraw care on their loved one, Hospice would take over in a couple of days, they were just waiting for the rest of the family to arrive so they could all be together. My heart went out to this father and son, to make such a tough decision any time is hard but to have to make it so close to Christmas was heartbreaking.

The unit heard and for the next two night the entire unit kept an eye on the family. Some one would always make sure a coffee cup was full, we brought food up for the family from the hospitals annual holiday dinner to share with them, any holiday baking was offered up for sampling. The father and son were always gracious, insisting they wanted to be no trouble and thanking us profusely for anything. Every night they left, they would thank us for watching over their loved one and every morning they came in they would tell us how lovely she looked and thank us for all our hard work.

My last night I came in and asked the outgoing nurse how my lady was doing and he showed my a heart monitor strip. Flat line.  Hospice had come in earlier that afternoon and they let her go, easily, without pain or suffering.

The Hospice nurse came out and spoke quietly with me, he let me know that all that was left was to wait for the mortuary. He said the family would like to dress her before she left and if I would be willing to help, to which I told him it would be fine, we'd make it happen. I sent both the Hospice nurse and the day nurse home, a couple of the other nurses had caught wind of what was going on and volunteered to help.

Her husband wanted to help, and I had no heart to tell him no. He helped us bath her and then brought out the clothes he had brought, a beautiful scarlet dress with silver embroidery, he shoes and her favorite wig. We dressed her and he helped all the while talking to her, teasing her for being no help and reminiscing about all the places they had gone with her wearing this outfit. I brushed out the hair piece and settled it on her head, asking for his style advice we settled on the curls just under her chin, just the way he remembered. At the end he shyly took two lipstick tubes from his pocket and asked me which I thought would go better with her outfit, we settled on a bright red and I applied it to her lips.

When we were all done he stopped and looked at her, then grabbed me in a huge bear hug. I could feel tears on his face for the first time, he whispered in my ear

"Thank you, now she looks like herself again and I can say goodbye to her."

I'm not sure how I didn't start crying. The family stayed with her waiting for the mortuary to come, they laughed and told stories about her, they held hands and cried together. When they left, they hugged us all, the son told us that he knew what we did was hard and that we should never forget the good that we do, even when it feels like no one else notices.

The husband gave me a hug and thanked me for everything I did. I hugged him back and thanked him, when he looked puzzled, I told him that to be asked to be part of the beauty that I had seen today and to be made part of his family for even a few hours was an honor. He smiled, gave me another hug and told me he wouldn't forget what we did for him and that he would come back and visit us, under better circumstances.


I have no doubt that he will, and I look forward to that day, 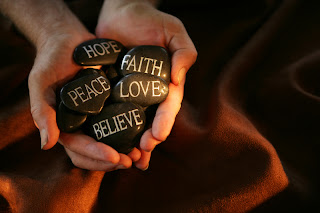 I thank them for what they gave me that day.

They reminded me that
Peace,
Hope,
Love,
and
Faith
still remain the cornerstones of our lives.